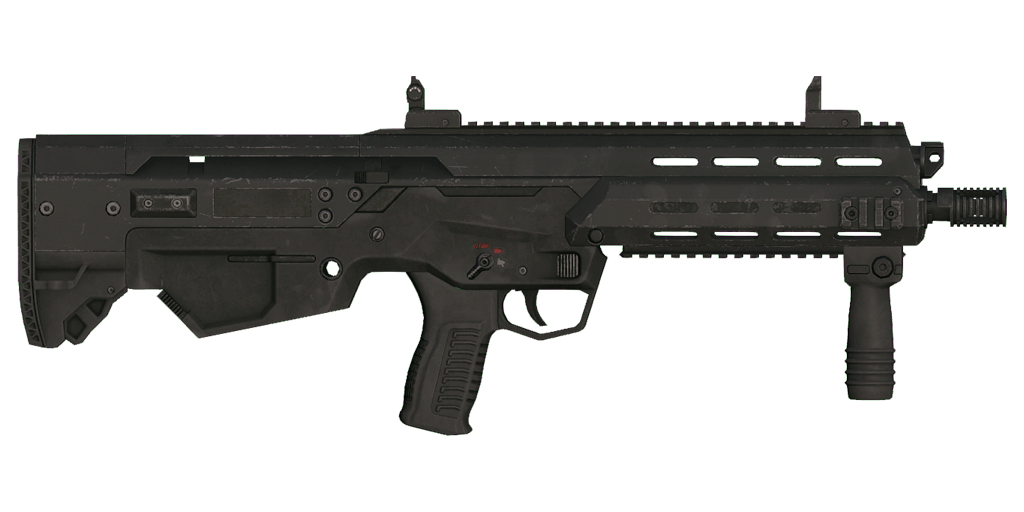 The weapon serves to provide a harder hitting option than a simple sidearm for Manticore affiliated characters. While it is possible for those outside the company to acquire it, its security features make actually using it difficult for anyone that isn't a skilled hacker, let alone what Manticore Enforcers will do if you're found in possession of one.​
.
Description:

The BR-20 rifle was developed as a compliment to the service pistol Manticore Incorporated issued to its Enforcement teams. While the pistol was a serviceable sidearm for day-to-day patrol activities, its performance fell short when dealing with situations where more stopping power or volume of fire was needed. So, after several rounds of R&D and field testing, the BR-20 was born.

Given how Manticore Enforcement's chief operating environment was, and is, the dense urban sprawls of America's cities, it was decided a compact and efficient design was needed. At first a short-barreled rifle was considered as such a design would be easy to maneuver in enclosed spaces. However, testing revealed that for the mid-range engagements in the streets, dockyards, and plazas of American cities, results were just not what was mandated. So a new idea was put forward, one that turned into the BR-20. It's bullpup configuration allows for a full length barrel in a package roughly the same size as a short barrel rifle, giving it the extra punch it needed for those longer range fights. Additionally, the BR-20 is chambered in a proprietary 6.8mm cartridge with 30 round magazines. This gives it better stopping power than standard 5.56mm selections without the bulk and weight seen with 7.62mm platforms.

And so with a basic design worked out, Manticore now turned to making it into a functional weapon fit for use in any number of situations. The casing was made of a mix of metal and high-grade polymer to cut down on weight, while the internal workings were made of high quality steel to ensure longevity and precision. To cut down on ammo waste and bump up net accuracy, fully automatic fire was bypassed in favor of semi-auto and 3-round burst capabilities. Basic iron sights were affixed as a backup, but sensors mounted in the magazine well and above the barrel give the BR-20 it's preferable "smart-link" function, feeding ammo count and aiming data to whatever HUD or CyberOtpic the Manticore operator has equipped. Plentiful rail space allows for attachments ranging from magnified optics, to lights and lasers, to a single shot 40mm grenade launcher. (Equipped for HE, smoke, rubber buckshot, and tear gas rounds). Finally, Manticore's signature bio-lock system was integrated into the weapon's grips and trigger mechanism. If the rifle is fired and the system does not detect fingerprints or cybernetic transponders registered in the Manticore employee database, the trigger mechanism is physically disengaged. This renders the weapon unable to fire, and requires a complete disassembly by Manticore armorers to reset.

All in all, the BR-20 is a tactically versatile, hard-hitting, and accurate weapon that proudly serves as a workhorse for Manticore Incorporated.
​